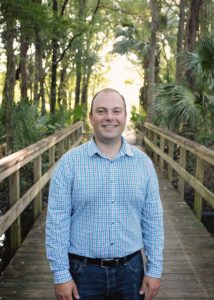 Dr. Enrico Dolcecore graduated from Palmer College of Chiropractic in Davenport, Iowa in 2008 after receiving his Bachelor of Science degree in Biochemistry and Physiology from the University of Calgary. Originally from Calgary, Canada Dr. Dolcecore is a huge hockey fan of both the Calgary Flames and Tampa Bay Lightning. When he’s not home spending time with his three girls he enjoys exercising, golfing, skating, and swimming.

After graduation Enrico returned to his hometown and opened up his chiropractic clinic with his wife (Dr. Christine Hafer). There he developed a Blair Upper Cervical practice and helped athletes, and people with neurological conditions such as migraines, vertigo, tinnitus, dizziness, sciatica, MS, ALS, tremors, Parkinson’s, neuropathy, numbness, tingling, disc bulges/herniations, and muscular conditions such as piriformis syndrome, tendonitis, rotator cuff injuries, frozen shoulder, and sprains/strains.

As the practice grew and more children were coming in for routine care Dr. Dolcecore’s passion for neurology exploded into helping kids with neurodevelopmental conditions such as autism, ADHD, ticks, motor delays, sensory processing, speech delay, and much more.

After moving to the Bay Area in 2017 he has helped around the city with his expertise and in 2018 opened Full Life Chiropractic. Today he helps the Lutz, Land O Lakes, and Tampa Bay area live happier, healthier lives without the use of drugs or surgery.